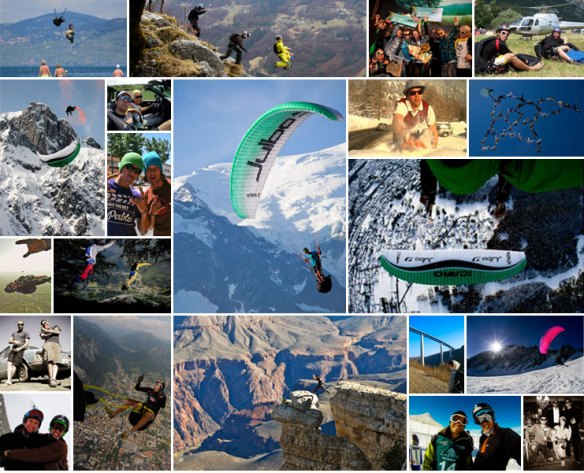 Would be way too long and boring to write all the process that lead me to the Skywalkers team. The following text was written by Håvard in the end of October 2011 to annouced myself as a Skywalker:

“In 2008 me and Mox stumbled over a funny non-english-speaking creature (also known as french people) in Chamonix. His name was Alex and he did everything he could to help us on our trip, including giving a crash course in surviving gnarly Velocity take offs and fixing snapped lines after a lot of crash and tumbles. We stayed in contact and came back to Chamonix the following winters where Alex again mentored us on all kinds of stuff that we should have known but did not know at all. This relationship evolved into Alex joining us on some skydiving and windtunnel camps and we also did some BASE trips together. Hands down I have never seen anyone pick up tunnelflying that fast. In less than a year Alex has gone from a novice to an absolute master of the wind with nothing to help him but pure dedication, creativity and hard work. Its been crazy to watch. Alex also has a genuine interest in photography and videography and is dedicated to keep evolving his editing and production skills. He has already worked with us on several projects and we hope to keep doing so in the future. He has an amazing skill in a large variety of sports like skydiving, paragliding, base jumping and windtunnelflying and therefore ups the skills to our team. In other words, he brings in a lot of qualities that we so far might have been lacking.

Yesterday, we did our first training session with Alex as a full time member of the Skywalkers. Alex said: “its feels like we’ve always been a team together, no?”